In 1993, when the Massachusetts Education Reform Act was signed into law, the City of Lawrence, Massachusetts faced a time of great turmoil.

Rates of poverty, teen pregnancy, illegal drug use, and gang violence were among the highest of the 351 cities and towns in Massachusetts. The city had been unable to balance the municipal budget and had been placed under the watchful eye of a state-mandated financial oversight board. The public school district was also faced with a state takeover due to chronically low test results, high dropout and attendance rates, and loss of accreditation for its only high school. 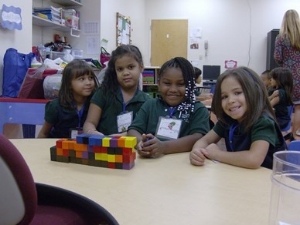 Under these conditions, Community Day Care Center of Lawrence, a private nonprofit founded in 1970 and known today as The Community Group, joined together with a dedicated group of parents, teachers, and community leaders with a common vision for the school. This founding group aimed to draw upon the expertise of community members to provide Lawrence children with a rigorous academic program that would prepare them to be successful students and solid citizens in high school and beyond.

In September 1995, Community Day Charter Public School, one of the first charters awarded in Massachusetts, opened with an initial enrollment of 112 students in kindergarten through third grade. In each successive year of the first five-year charter (1995-2000), the school added grades until reaching the maximum K-8 enrollment of 306. In June 2000, the school’s first class of eighth grade students graduated. In 2007-2008, school enrollment increased to 331 students in accordance with an amendment to the school’s charter.

Also in fall 2012, The Community Group partnered with the Lawrence Public Schools district to establish and operate Community Day Arlington Elementary School, with the goal of providing a strong education that meets the needs of all students, preparing them for bright futures. The school's practices are modeled after those of Community Day Charter Public Schools.

Read the history of The Community Group